You may have heard of Necker Island. If not, it’s a small (depending how you define small) island in the British Virgin Islands entirely owned by Sir Richard Branson. At the end of July 2017, the exclusive paradise resort hosted the Blockchain Summit.

“The Blockchain is an incorruptible digital ledger of economic transactions that can be programmed to record not just financial transactions but virtually everything of value.”

Each year, the Blockchain Summit welcomes key global influencers in technology, civil society, democracy promotion and innovation to a discussion about the world-changing potential applications of the Blockchain.

One of the organisations invited was WAOF (The Western Australian Ocean Foundation).

As you might expect, presenting to these key global influencers (including Sir Richard Branson himself) was a pretty nerve-wracking prospect for them.

Well, you know what helps calm those nerves? An expertly-designed slide deck. If you’re confident in the slides behind you, you can convert that into your delivery.

Paula Taylor, WAOF Co-Founder and Bill Tai, Silicon Valley VC and Ocean Health advocate with Sir Richard Branson at the welcome dinner ahead of the Necker Island Blockchain Summit and announcement of the Houtman Abrolhos Islands as a Hope Spot.

WAOF came to us to create their Blockchain Summit presentation because, well, if you’re presenting to some of the biggest and most influential people in the world, then you need to ensure your message is conveyed in the best possible way. A set of slides that shines with professionalism and slickness goes a long way to achieving that.

The WAOF needed a “mind-blowing” presentation and they needed it in five days. We began with a kick-off call with Paula Taylor, WAOF Co-Founder, to understand the background behind the presentation and exactly what she was looking for. The presentation was to be a joint effort between WAOF and Mission Blue.

Hope Spots are special places that are critical to the health of the ocean. They can be large or small, but they all provide hope due to a variety of factors. They could have a diversity of species, contain very rare or threatened species, be of particular economic importance to the community, or a number of other factors.

Firstly, Gigi Brisson, Emeritus Director at Mission Blue announced that The Houtman Abrolhos Islands, an A-Class marine reserve 60km off the coast of Geraldton in Western Australia, was being recognised as an ocean Hope Spot by Mission Blue.

And then Paula Taylor went on to explain how Blockchain technology could be used to support the engagement in, and management of, the Abrolhos Islands with its shared, tamper-proof and permanent data.

The presentation needed to include lots of facts and figures, so our best creative minds brainstormed interesting ways of visualising this data, coupled with striking ocean images and video backgrounds.

Paula supplied us with her slide content and lots of high-quality imagery and film. We combined this with some stock images and video clips from an earlier Mission Blue documentary, and the result was a visually-striking presentation that drew attention to some important ocean statistics.

We trimmed much of the content down and moved it off the slides and into the speaker notes, keeping the slides themselves as visual as possible.

In the five days we had, four of these were spent with our designers and PowerPoint developers and one with our motion graphics designer to edit the various video clips we used.

The final outcome was a presentation that contained fascinating, educational data, impactful quotes and powerful imagery that helped to garner an emotional response from the audience. The presentation contained shocking statistics that highlighted the need for change, but ultimately it was one that offered hope for the future of our oceans.

After the summit and the presentation had been delivered we checked in with Paula to see how it all went:

“Your presentation was the most amazing deck I have ever seen! Thank you so much! I have passed it onto Mission Blue also so they can use in the future.”

A job well done then.

Check out the wrap video from the summit below: 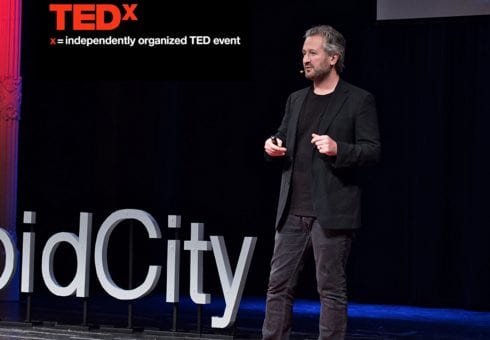 Buffalo 7 get their first taste of TEDx with OpenMarket

OpenMarket have been a great client for Buffalo 7. As a forward-thinking mobile technology company that helps the world’s biggest brands to...

Pitching to a household name? Come and see Buffalo 7

Tusker is a car benefit company offering salary sacrifice cars, company cars and fleet management services. They were pitching their services to a...

Read more
< Back to Case studies